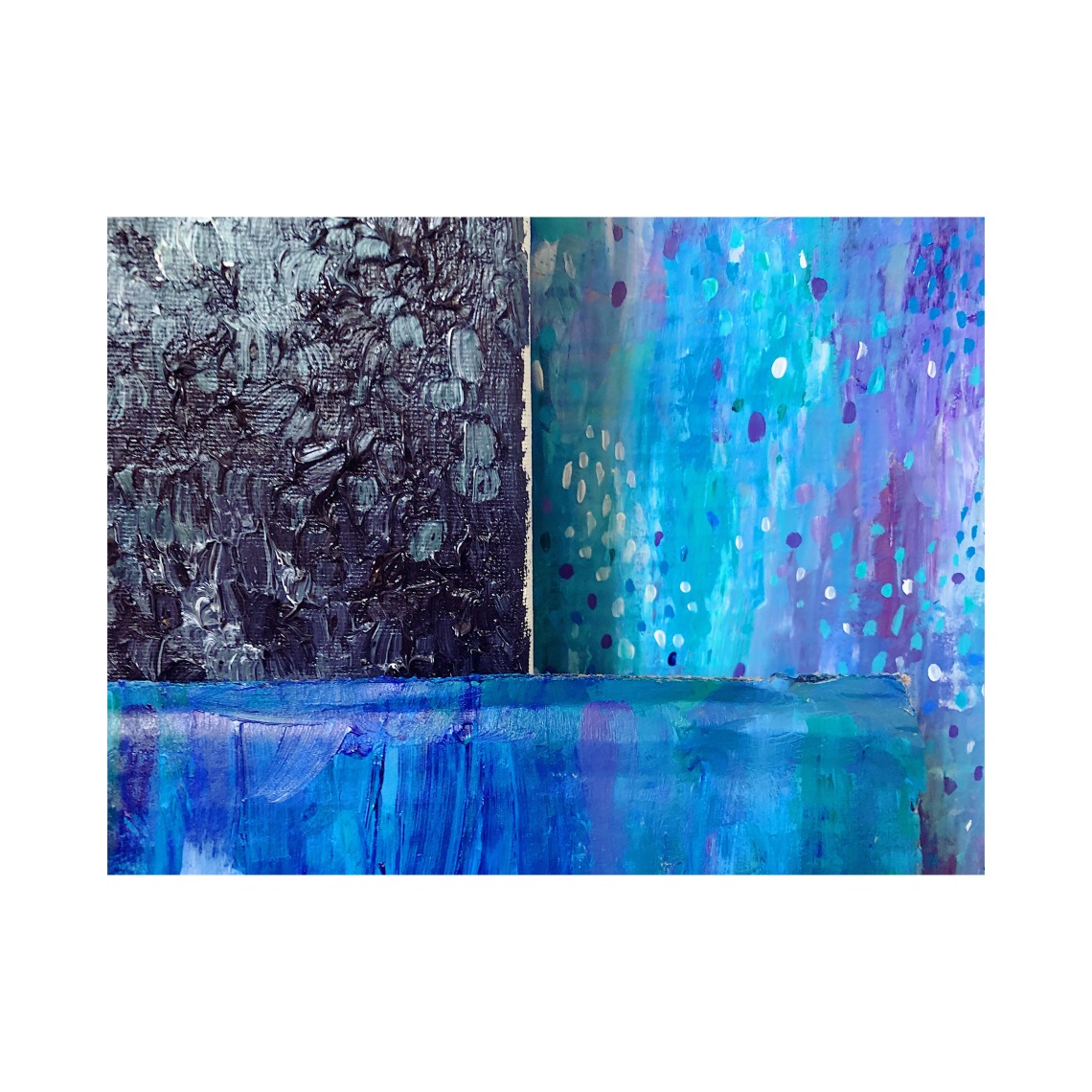 Wow; it’s been a while! It certainly flew by; it doesn’t feel like it was almost two years ago since I last wrote a post. But hey, I’m back now and if you would care to humour me let me explain what I’ve been up to recently.

After my residency in Bulgaria, I returned to Glasgow and fell into a downwards spiral. Towards the end of my time abroad I became quite ill, physically, and ended up spending a while in the hospital – which in turn triggered my mental health issues. Although I wasn’t the lowest I’ve ever been, it has only been in the last couple of months that I have truly started to discover myself. On my return from Bulgaria, it took me close to a year to find a studio but again, I fell into a rut – not only with my day to day life but also with my practice. I found myself creating the same things over and over again with not really any progress or development; eventually pretty much halting my practice. As I tried to regain confidence within my abilities of an artist, I felt lost in every meaning of the word.

At the end of 2019, my Gran passed away. She initially fell ill when I was in Bulgaria and struggled with her battle for just over a year. I was devastated as my Gran was a big part of my life, both as an adult and child. To the contrary, because she was ill for so long I was more prepared for her passing. Especially within her last few months, we had the most wholesome natters that I will not ever forget. She was at peace and was ready to be reunited with my Gramps once again who passed away about 10 years prior.With her passing, after the initial grieving stage – she reignited my creativity. It is interesting to note that I found my passion for art when my Gramps passed away in 2011. My Gran worked a lot with threads and tapestries which has gave me numerous ideas that I want to experiment with in the near future. However, I’m here to talk about my most current colourful works. Yes, you heard me – colourful! My Grans passing encouraged me in many ways but what I was drawn to most was her colours. She loved turquoise, teal, blue, green and purple- which is where my colour journey began.

With a bit of hesitation, I began creating with my usual painting style but instead of my traditional black, white and grey; the river-like colours came bursting out. However, the question that kept arising in my mind was; why was I so afraid of colour in the first place? I think because for so long I created with black as my main focus, that I lost some of the true essence of my practice. Now, I’m becoming even more focused on the process rather than the outcome; a phrase that perhaps lost a shred of meaning for a while as I became more concentrated on the aesthetic of the darkness rather than the true subject matter. In hindsight, I became very caught up in my own mind worrying about what I thought I wanted to portray to the audience, rather than the original intent of my practice – using art in a therapeutic manner. My artworks have always acted as an aid to my mindfulness practice; which is what I will be focusing on upon as the foundations of my artistic practice. 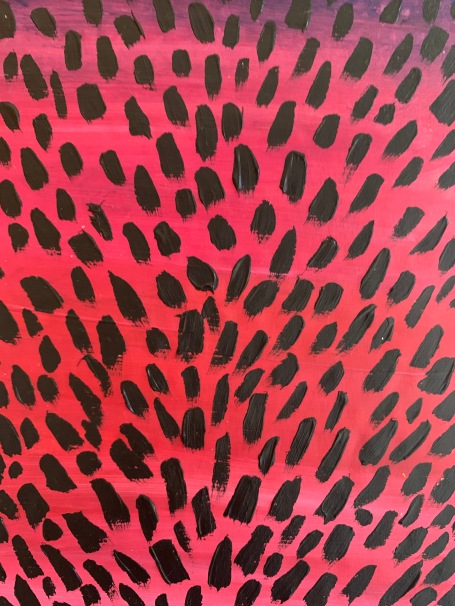 My creativity and productivity has sparked since COVID-19 as the world has been in lockdown. With having so much free time to create, I have been able to find my way again with experimentation and then reflection. As I previously mentioned, my process hasn’t necessarily changed, at least not as drastically as my colour situation. Mark making and the therapeutic repetition are still among my main focuses in terms of process. I’ve been learning not to be so precious with the individual position of the marks because ‘mistakes’ are part of it. Not everything in life is going to be one hundred percent perfect; but isn’t that what makes for the wondrous journey that is life? Nevertheless; learning to be less precious doesn’t necessarily mean that I’m neglecting thinking about the individuality of the marks that I’m making. The marks that I am creating may seem randomly placed upon first glance, and perhaps occasionally seemingly random to myself, but I would like to propose a question – doesn’t everything happen for a reason? This is a concept that I have been deliberating on for a while now. Everything in the universe that has been created (by both man and earth) serves a purpose, in some form or another; things that were once unknown and unfigured out by the human race, have now been discovered and divulged upon. Indefinitely, there is still more to be discovered; things at the moment which are incomprehensible to us humans. I may have gone a long way for a shortcut here, but what I’m trying to say, is that there is so many undiscovered and uncertain abundances about the consciousness of us humans. So for example, my mark making that is seemingly unplanned to many; may in fact not be. Whilst mid creation, I have two main modes of making. The first mode is very free and goes with the flow. The second mode tends to come later on in the life of the painting, which is where I’m more conscious of the positions of the individual marks. Upon reflection of my making process, it is important to be able to have that balance between the conscious and unconscious; a playfulness coupled with solitude and serenity. A higher purposed journey through variations of buoyant brushstrokes embracing an expedition of the soul.

After my initial step into the world of colour, I began to experiment farther, eventually leading me to pinks, purples and further down the line to pastel colours (that I may have became slightly obsessed with over the past few months). I ventured to the pinks and purples after I had been working with my Grans colours, mostly because I really enjoyed the physicality of mixing colours – especially purple. There’s a satisfaction of its own when it comes to mixing colours. I tend to mix the colours as on the canvas as I go, mixing a variation for each individual stroke; again creating this feeling of chance. The colours will never be the exact same; ever. There will be slight tonal differences and hues throughout the works which is something of an advantage– because although it may be seemingly random – everything happens for a reason – right? And here we are again, coming back to the point that I just made. Everything is connected in some way or another, whether we can find the connection or not and it is here in which I am trying to find a reason. I am not only delving into our consciousness as a society but mainly focusing on my individual conscious/unconscious.

In terms of scale, I have been mostly working in the smaller side of things – mainly because I don’t have a lot of space in my home studio. As a whole, I do enjoy working in a larger scale due to the impact of the larger works. However, working smaller allows for more time for experimentation which I especially needed to find my way through a variety of colour palettes. As I mentioned, I became a little obsessed with pastel colours but I’m not going to talk too much about it in this post. I plan to write a little bit more about my pastel paintings at a later date to allow room for me to delve deep into my psyche and to be able to share it with you all in as much depth as I can.

For the time being, I am going to continue on this journey through painting, mindfulness and meditation, topped with a lot of experimentation as I navigate through the world of everything colour. I will continue to balance on the seesaw of what is meant to be will be, and that somehow – everything happens for a reason.