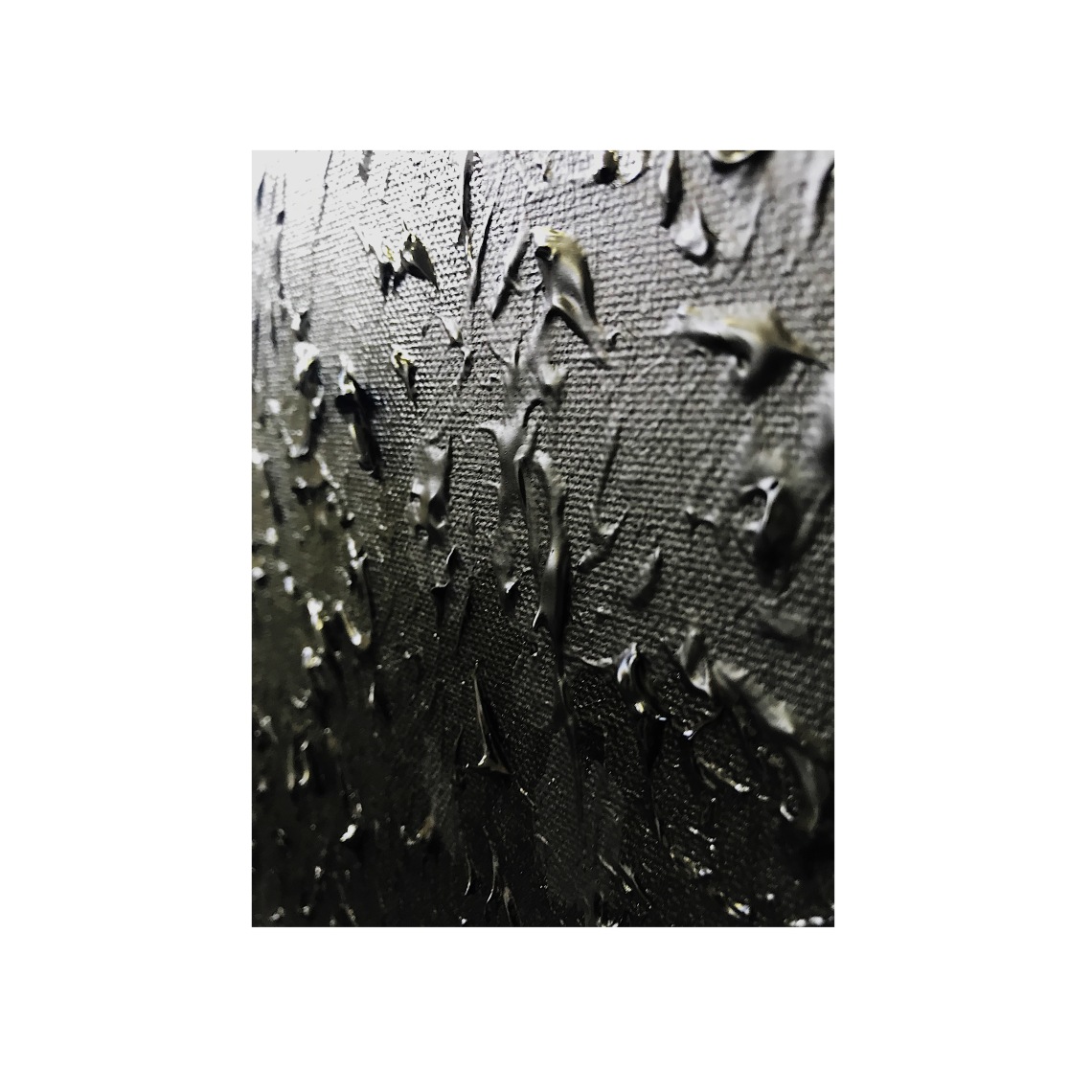 Nebulous: – in form of a cloud or haze; hazy

– of a concept) vague or ill-defined

Nebulous 3.0 is the last in the series of Nebulous. There was the first one that I made in Feb 2017 which was the smallest. Nebulous 2.0 was created only a few months ago in February/March. Now is the last one, the largest, grandest, most powerful one there is yet.

These paintings are all similar in the process making and the final outcome. All painted with black acrylic and a tiny brush. By using a small brush, it creates a lot more work, more work than what is needed to fill the canvas. However, this isn’t necessarily obvious within a quick glance at the painting. If looking from far away it shall just look like a big black gaping hole in the wall – perhaps. Or just black rectangle, depends how much one’s imagination can wander. It physically takes a longer time and more effort to make the work in this way.

The aim is to cover the whole canvas in black. Perhaps at first, it was not about the final outcome – it was more about the process both physical and mental, that was involved. It was a way to create space between myself and this world that some may call hectic. However, my own world is hectic enough without bringing reality into it. By painting repetitive strokes over and over again gives me something to focus my mind on, it can be oddly calming and satisfying to one with such problems that I experience. Most often or not I can not focus my mind on solely one thing as there is usually a number of thoughts and questions and feelings that can become all too overwhelming when combined. It is the process of separating my questionable mind from reality, escaping the order and the repetition that I HAVE to do everyday. The rituals of keeping things in order, the rituals of having my full day planned all the way down to when I will brush my teeth, it will have to be at the time that I have planned. When things do not go to my planned agenda, it really ails me. It makes it too hard to keep going. Although it may sound silly to most – by having this ‘quirk’, it can cause a lot more hassle than its worth. Although sometimes my reaction will be in different ways. Sometimes there is an unbearable deep rage that boils inside my body, making the blood pound in my ears coinciding with the repulsive word vomit that often makes a dramatic appearance. Other times there is just silence. There are no words that communicate my feelings, or maybe there is but I am just unsure of my feelings – I’m unsure what I feel. All I know is that it can be too much to deal with sometimes. Even though I have got a lot better, through times of stress I notice that all my issues become more apparent and visible.

When you look at the piece, all there is darkness. It does not have the same effect in pictures, however than it does in reality. The sheer scale of the work is important as it creates the sense of overwhelming-ness. These works have been inspired by Rothko’s paintings. I remember when I first came across the artist, I was enamoured (and that was within photographs) – I can imagine in real life there is so much more feeling and emotion.

The black is not just black. There are slightly different shades and different types of paint. It is mostly acrylic but different types, such as there are some matt sections and some shinier sections and every so often one will come across a matt brushstroke in a shiny section or a shiny brushstroke in a matt section. Not all is what it seems. Due to the nature of acrylic paint and a tiny brush, often left behind are little clumps of paint that have gathered on the brush before eventually coming off onto the canvas. Each little clump takes on its own form and shape; no two are the exact same shape or density or size. Just like no two cases of depression or OCD or BPD or anxiety will ever be the exact same. The mix of textures and paints and shades coincides with the mix of symptoms there can be within the realms of mental health. Most often or not, people with a mental health disorder usually suffer from more than one. For example, some that I struggle with are clinical depression, anxiety (in various forms), OCD (obsessive compulsive disorder) and BPD (borderline personality disorder. Some symptoms from these illnesses over lap into the next but there are without a doubt conflicting symptoms that can enhance the overwhelming feeling of losing control.

Whilst writing this, I have just had an epiphany. What ails me most is when things do not go to plan or the way that I have organised them – including daily tasks and chores, events, etc. – anything that one can think of. I think why am I like this but now I have clicked a little. It’s the idea of losing control that can perhaps be scary or be what causes the overwhelming feeling. Why don’t I like losing control – does it show weakness? Subconsciously I try to hide this side of me from the world because I don’t know how they will take me on. It is only recently within the last year or so that I have started to talk openly about my problems. However, even though I have begun to talk more, people perhaps still don’t really see them in me because I have this hard exterior shell which I do not let people by often. Where does this come from? My childhood? I was bullied an awful lot in school when I was younger and had a few unfortunate situations as well – so maybe the control doesn’t want to be lost now like it was then. It was the most vulnerable that I have been, openly because I was only a child. Even though I cannot remember every little detail of that not so nice time period, it still perhaps haunts me. The idea of being that vulnerable again makes me want to be in control of every little thing that I possibly can be. I need the control. I need everything to go to my plans.

It seems like I may have gone off on a slight tangent. Having various mental health disorders can sometimes mean conflicting thoughts. For example, there are different stages of BPD. One minute there can be a very low mood that can perhaps result in some dangerous thoughts. However, say 20 minutes later I can be fine. Actually better than fine. I can be so high up there, in such a good mood for no apparent reason. But then it is straight back down an hour later. There is a conflict with emotions – there is never an easy and steady balance. It is either really up or really down. There is the chaotic and there is the depressive. The mix of textures and paints are to perhaps imply the conflict within one’s mind. The conflict that only one can experience in their mind. A conflict that only themselves can deal with. It isn’t obvious. It is subtle. Very subtle.

Subtlety is key within my practice. The aura of the subtlety creates a not so subtle stance. The subtleness and simplicity of the work demonstrates the idea of mental health and how it is sometimes portrayed. Mentally ill victims are not always in your face, often there are sufferers where others do not even notice. High functioning patients, like myself, are often just grouped as perhaps being a little weird. Its this idea of not being able to see something. People often disregard mental illnesses as real illness because in some cases they are perhaps not visible. But just because one cannot see, does not mean that there is nothing there to be seen. The simplicity of the painting is just that. It seems simple at first glance, or maybe even at the hundredth glance but that isn’t the case. There has been more work put into this that one may realise. I have purposely made it harder for myself by using an extra small brush on an extra large canvas – but that’s the way it is. People with mental illnesses often make things more complex for themselves both consciously and subconsciously. I make things hard for myself by needing everything planned and organised because often it does not go to plan and then I have major anxiety, or sometimes even a panic attack. It isn’t that I make things purposely hard for myself even though I do, because if I could – I would rather be ‘normal’ and be able to not be so tense and so stressed about everything all the time. The repetition within the painting also depicts the repetition that I encounter within my daily life and my daily rituals. There is a conflicting thought between both the simplicity and the complexity.

Contemporary artist with great ambitions. Lucky and honoured to be able to say that I have been accepted to study a Masters of Fine Art in San Francisco Art Institute. However, fees are quite expensive so I am trying to raise funds to help me get there. To donate, please visit https://www.gofundme.com/hannahyuill View all posts by Hannah Yuill