It had been wanting to do this project for a while but it was just a case of finding the time and space to do it. Basically, I had planned to use all my leftover polystyrene bits from my previous work where i destroyed the cube (named 563 Minutes). I was very optimistic because I was excited to be able to create something so large scale that it could not be transported- so that the viewer had to be there to experience it. A main part is about the experience. The scale enhances this notion of being overwhelmed and emotions that are uncontrollable. It is a struggle to live with various conflicting mental health disorders but the use of repetition throughout my daily life is what sometimes helps me deal with everything little better.

I suffer from OCD, BPD, depression and anxiety (on and off). Having depression is being bed bound. The constant urge to not want to do anything because of the good old thought – “whats the point, nothing matters anyway.”. It makes you not see the world in all its beauty, everything is reflected negatively in ones mind – well in my situation anyway. However, the opposite of this is anxiety. The anxiety makes you want to do stuff in a fear of missing out or falling behind, etc. These two illnesses are constantly battling it out within my mind and sometimes it gets just too overwhelming that I start to lose control. Talking about control, I have Obsessive Compulsive Disorder on top of that – so this brings a whole other aspect to my mind. I NEED to have everything planned and organised and tidy and know what I am doing for the full time ahead. Obviously, it is beyond obsessive sometimes but with this included with the depression and anxiety – it can be unbearable. It’s like there are other people in my head, not just me and my one persona but theres all these conflicting emotions and thoughts that just try to shout over each other until one is heard. It can be really tough.

At first I was unsure why I was doing it but working through the process I learned a lot about my practice by jotting down some notes every few hours.  Like I previously mentioned, at first I was rather optimistic. I was looking forward to relaxing and gaining this mediative state of mind trying to complete the installation. It is important foe me to get into my own little world (which is not difficult). It is important to be able to connect with myself as the only time I really do this or feel comfortable doing it is when I am making. The making is like a therapy to me. I can just sit there for days and days with no one around and just make up little stories in my head – good and bad. I listen to my music or quite often some truly dark podcasts and it just helps me escape from reality for a little while.

However, this soon changed as I had under anticipated how long it would take and how grilling it may be. I was sitting on the floor to at least start the piece cause I wanted the full wall covered, so makes sense to start from the bottom. But it was starting to make my back and legs ache just from sitting in the same position. But I couldn’t stop, I felt as though I had this mammoth task that I needed to complete otherwise it would just be the end of the world – maybe a bit of an exaggeration but thats what it can be like in my mind sometimes. By the end of my first day working on it – I did not get do far. I had clearly over estimated how long and much materials it would take.

The next day I was excited to get in and go back to creating this madness. I did not sleep well the previous night, so being ‘allowed’ to be in this vegetive state and be in a trance like condition – I was looking froward to zoning out from the real world for a little bit. However, same as the previous day I started to regret it again because of the pain it was physically causing me. My back was in so much pain I couldn’t handle it and had to call it a day rather early, earlier than I had hoped. Although it may not seem like something so strenuous, I was exhausted both mentally and physically. Having all that time alone to just think about things that seemingly random and how it is not hard to get myself into a dark place by doing so, I felt that I really had to be careful with what I thought about.

Throughout the process however, I was doing things subconsciously and it wasn’t until I stopped and had a small moment of reflection that I noticed. I wondered why I was putting the pieces where I had put them? Why did I put that piece to the right of that piece but not to the left? Why above? Why underneath? So I thought about why, and I realised I was just simply trying to make them fit together, almost like a jigsaw. I was trying to hide the empty parts of the wall – was i trying to hid the empty parts of myself from the world? Shielding myself from pity and humiliation.

The small bits of polystyrene were only held on by bluetac and it was my first way of thinking about how to attach them to the wall. The stability wasn’t so secure due to this. Despite that, none of the pieces ever fell off. Well not until I accidentally nudged a part of the wall and a few bits fell off. It’s fragile to touch. It may not look super fragile but one small touch and it comes tumbling down. This linked up perfectly to me with people suffering from mental health issues but are high functioning – so it may be as clear to others as it is to oneself. People may make the jokes and be happy and chirpy on the outside but in the inside they could be fighting and inner battle that no one else knows about apart from themselves. I am a high functioning ‘victim’. Most people see me as a confident, bubbly and quirky girl but in reality I am literally on edge all the time. I don;t like to show my emotions or let anyone get to know how broken I really am because well you never know who you can trust. It is a vulnerable situation to be in but thats the way it is. 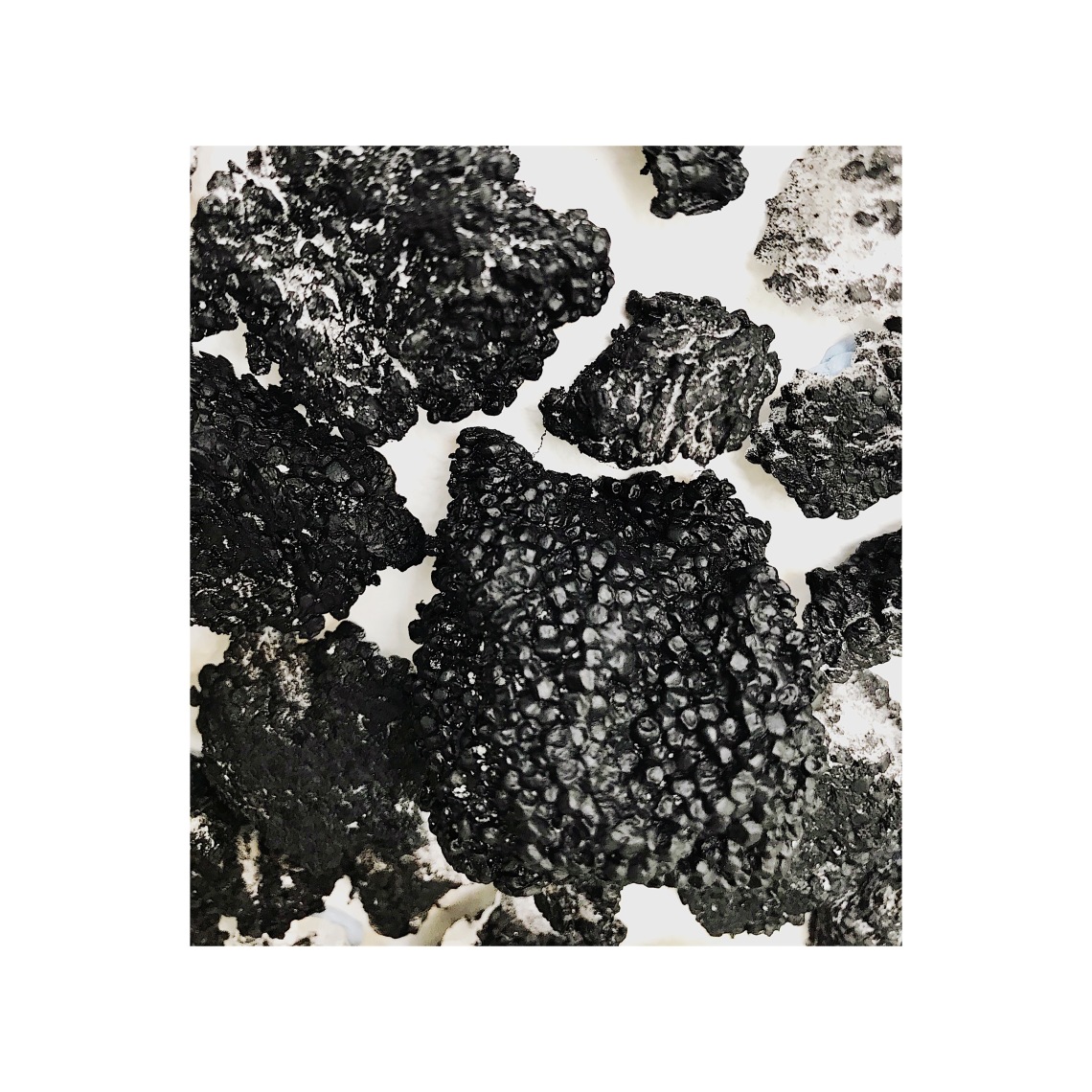 I was also curious about why I started in the corner? I hadn’t even thought about where I was going to start, it was just automatic. I could have started in the middle and let things bleed from the centre and it could have perhaps made a completely different piece. I thought about how it would look from the corner after I questioned why I started there. It almost feels like something is growing, encapsulating myself and perhaps the viewer.

It is a darkness that is becoming overwhelming to oneself.

Why was I doing this when it was causing me so much physical pain. Im mirroring the idea of mental main or uncontrollable emotions in a productive way. By creating world that are labour intensive people wont necessarily understand how much work and effort has went into it. But that is also the beauty of my practice. It marries into the idea of our society not believing in mental illnesses and that it is all just a myth. Just because you cannot see it, doesn’t mean that it isn’t there. In this piece, I travel though a mental journey whilst it becomes physically shown and known. I want to perhaps display in a subtle way the pernickety-ness of it all. It might seem over the top and obsessive to some but it both helps create and demonstrate the stress that I constantly find myself in, day to day. The work is without a doubt instinctive. Usually I have every little thing of my day and weeks planned out to the T but when it comes to my practice I just feel it. I just do what I want to do and then figure out why I have done it later on. My practice consists of a mixture of making and reflecting periods which help me delve deep into why and how I create. 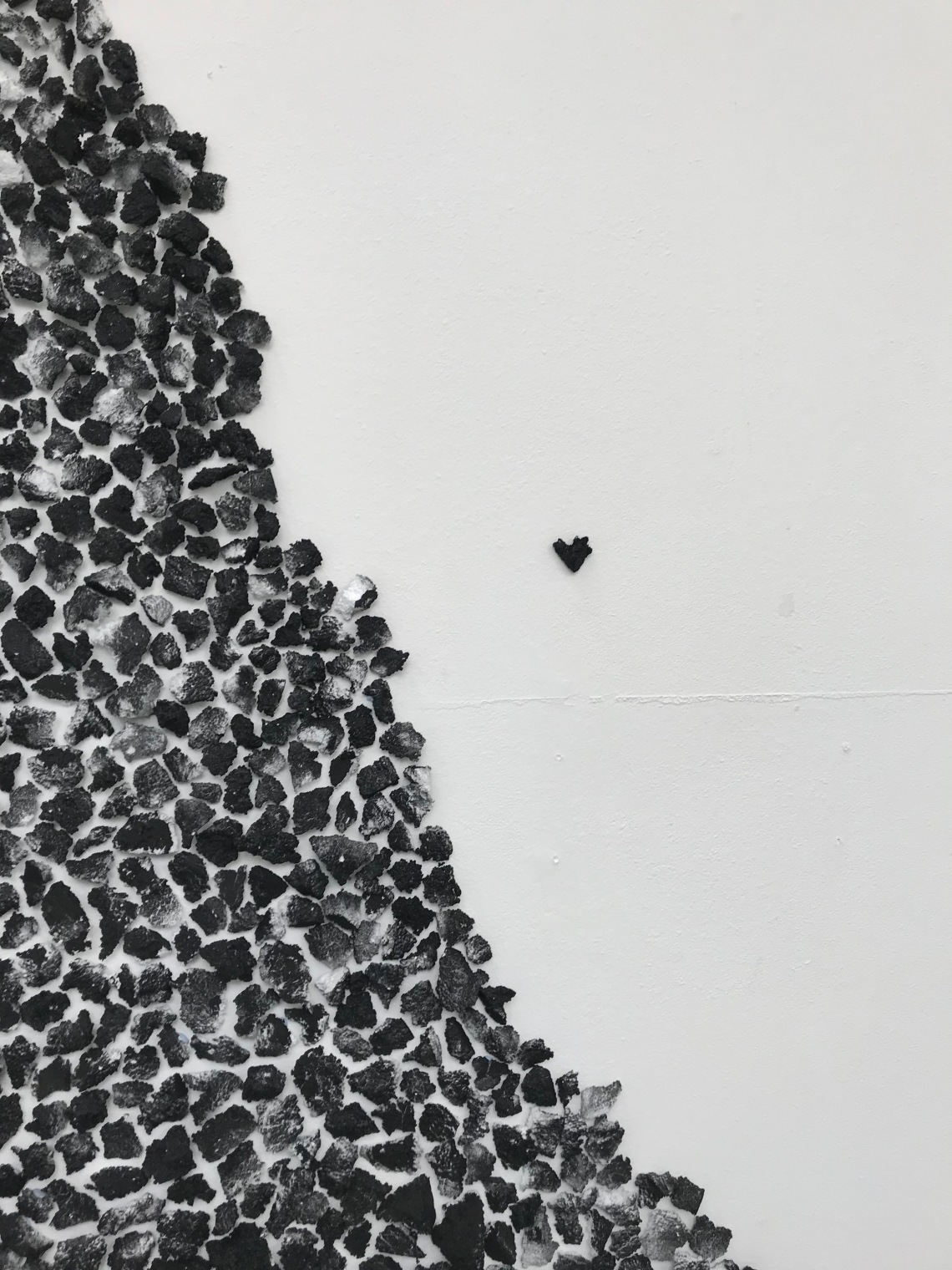 Its as if I am trying to put something together that doesn’t actually go together. Why am I forcing something that isn’t meant to be? Is that what I do to myself. Force myself to try and act a little more normal and quiet so that people wont see the real side of my obsessiveness and uncontrollable emotions at times. Its as though I am trying to make sense of something that doesn’t make sense. I always wonder to myself, why me? Like why am I broken and loads of other people are perfect. Why can I not fix myself, no matter how hard I try – I am going to be broken forever. But then on the other hand I think to myself – why does it matter? It is the way I am so I should just embrace it – not everything has to make sense does it? But perhaps in my head it does have to make sense for me to understand why… but why do I have to understand why? A constant hurricane of questions formulate in my brain. Its like an unwanted entity that keeps growing and growing, filing the place with darkness until one is no longer able for anything. Will it ever stop? Will it consume me? Will it consume everything? WHY?

After 10 and a bit days, I finally ‘finished’. Originally I had planned to do the whole room but obviously there was not enough time for me to do that. Then I had planned that I would just do the whole wall but I ended up running out of polystyrene bits so I had to compromise.

However, I think it may perhaps be more successful like this, rather than a full complete wall. It suggests the idea of something growing and growing. The darkness is overtaking the world and will not let anyone be safe. Its almost as if there are roots from trees, or hands reaching for something that is just out of ones grasp. The darkness is trying to consume its victims but is it possible?