Throughout my practice I have always struggled with how to my present my work. I feel as though sometimes the end presentation does not do justice to the work because it isn’t displayed to the best of its ability – but that’s my issue.

The past 3 or 4 weeks I haven’t been concentrating as much as I should have on my practice but that was just due to other commitments (mainly dissertation). Usually when I take a wee break from my practice I usually come back with a fresh new look at things and new ideas on how to progress. However, this time I was still a little stuck. I want to create work that has an impact on the audience and perhaps overwhelming to some viewers.  I think the initial ideas that I have for my work are strong but its just that progression from development to a final piece which I struggle with. Thinking about final resolutions makes me question what exactly I am trying to do with my work.

There are two ways that I could go about final displays. On one hand it could be super busy and cluttered and just a mix of things that I have created (my original plan). The idea behind this is to perhaps demonstrate the chaos that goes on daily within my mind. The conflicting personalities and disorders and voices that just talk over each other. I cant tell what they are saying because there is just a constant conflict with my thoughts. This would be the overwhelming aspect that I would like to portray. However, on the other hand, I think some parts of my work get lost in this sort of set up. Does it make a stronger impact with just one large scale print/drawing? You can see the time and detail that has gone into this sort of work. It is evident the obsessiveness that has gone into such works. I guess though, these conflicting ideas could marry alongside the work?

Ive been trying to think of different ways to illustrate both of these ideas. The organised and obsessed with everything going to plan combined with the chaos of overthinking and all the thoughts conflicted. In either  outcome, an important part of the outcome is scale. I think that the works have to be big to create an impact.

I remember when I was first beginning to be diagnosed with mental disorders was when I was in 5th year at school. So I was about 15 or 16. I had always been broken since I could remember but this was the time that I no longer could keep it together and everything got the better of me. It was one of my darkest times.

However, I was still at high school ready to sit my higher exams and I was finding it extremely hard to motivate myself. I didn’t want to leave my bed at all but at the same time I had severe anxiety about failing everything. So I was trying to think of a way to motivate myself and the idea that I came up with at the time I really thought it was helpful but reflecting back – it was the opposite. I thought it would help me if I saw negative thoughts (visually). I covered my bedroom in the little sticky post it notes – there was no space clear. The walls could not be seen as it was just a sea of sticky notes. On these little notes I wrote all kind of things like FAIL, STUPID, UGLY, CANT, HATE, DIE… I thought this was going to motivate me to do well but really it did the opposite.

The idea behind this piece of work is inspired by that time in my life. Although all my work is about the darkness and my mental health issues – this one is very specific. I thought about this one before I made it as usually I just make stuff and reflect on why I have made it – almost like a therapy session. There is always a reason for something wether it be conscious or unconscious – it is there – and thats just the way my practice works.

The piece ties in with my experimentation on displaying my work. I have so many prints and drawings that I do not know what to do with that would just get lost in a big installation. I cut up my work into little squares and wanted to keep the idea of repetition throughout. The idea of repetition is important. Its the idea of a person perhaps losing ones mind (in my case), the obsessive need for everything to be perfect and in order can be undeniably stressful. I think for me personally, it is healthy that Ia m channelling these struggles into my practice – it is a healthy means of escape. 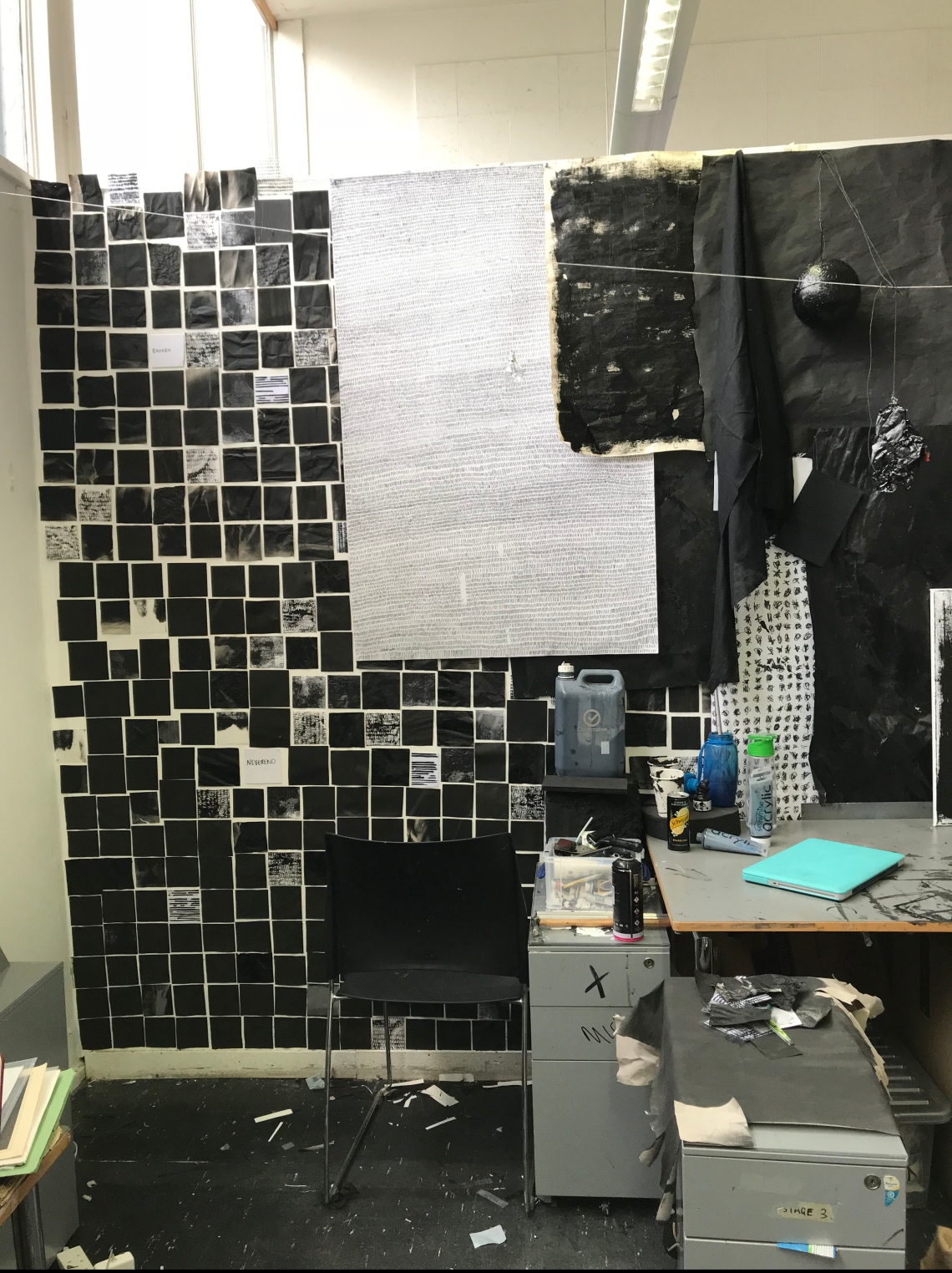 I emtpied part of my wall in the studio so that I could get an idea if this worked or not. I am still unsure if it is successful? I think the idea is a lot stronger than what the outcome has produced as it may look too much like a bathroom wall. However, I think within a photograph it doesn’t have quite the same effect. It’s different being able to see my work in person as the experience is important. The viewer does not recieve the same impact just form a photograph. They have to be there to experience the overwhelming aspect.

When people come into m studio for the first time they are often overwhelmed saying “oh my, theres so much” and I enjoy that. I like that even my studio space creates an impact of like ‘damn, theres loads of stuff here’. One might not know where to start looking because there is so much which I do enjoy because that is what it can be like in my head. I have so many problems – some important and some unimportant and when I am trying to sort out my thoughts I never know where to start because there is just so much that has to be addressed.  I enjoy the concept of people getting lost in my work – almost as though they are getting lost in the darkness.

Contemporary artist with great ambitions. Lucky and honoured to be able to say that I have been accepted to study a Masters of Fine Art in San Francisco Art Institute. However, fees are quite expensive so I am trying to raise funds to help me get there. To donate, please visit https://www.gofundme.com/hannahyuill View all posts by Hannah Yuill