As my Pre-Degree show approaches, I question myself as to what I would like to exhibit. In reality I would want to recreate my studio space in some shape or form – however, perhaps I should leave this until the degree show until I have even more works. 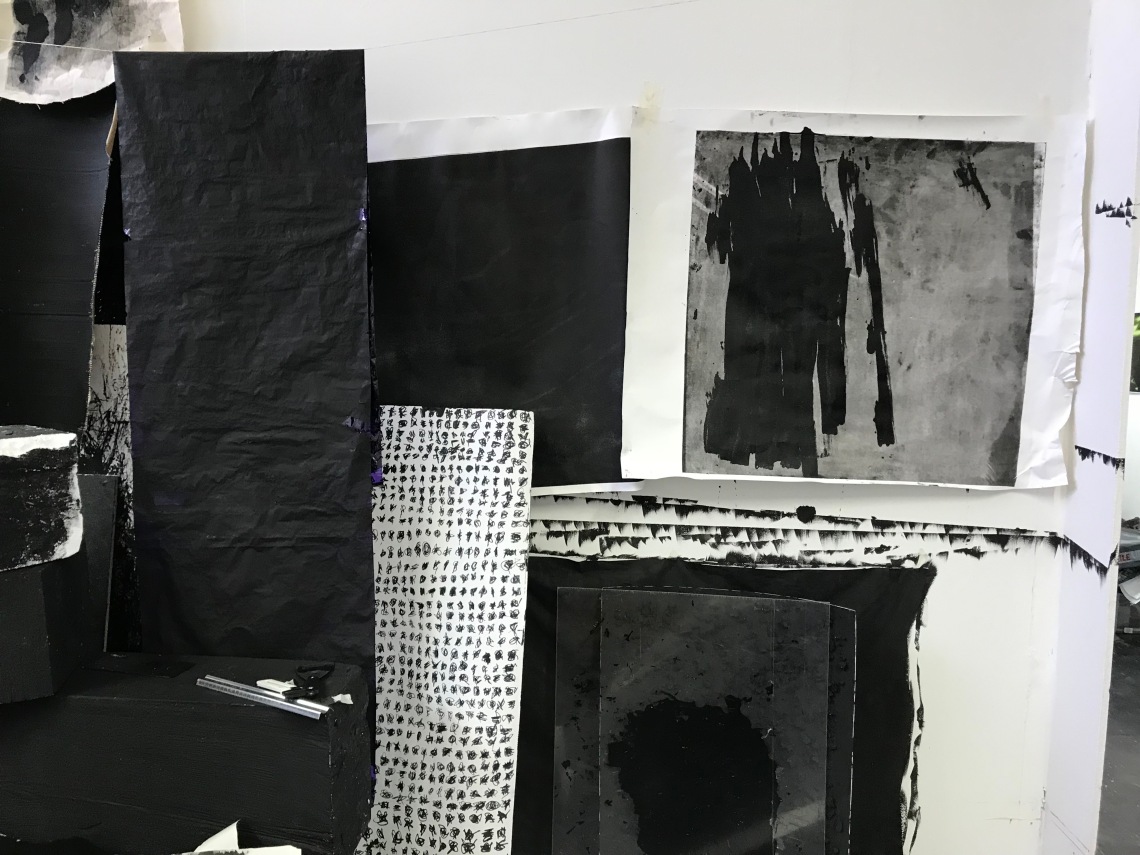 My work looks best when it is in the studio in my opinion. I think this is because the process of my work is important and when that is placed in a typical gallery space – the essence is lost. It is important to be able to see EVERYTHING!

Even though sometimes I get frustrated with how messy my studio is, it is definielty and indicator of my obesseive qualites and the darkness that I consume. It is a tricky thing to illustrate depression or other mental health orders because thereis always this risk of being too literal and cliche. I do not want to make work in the way that would perhaps be expected of me (someone who has/had suffered from mental illnesses.

I guess the black is pretty obvious but then again is it that obvious? Maybe to have one black print or drawing would be the normal thought for creating a peice of work about depression. What makes my practice ‘work’ is the sheer scale of it all. If I just presented one print – I am unsure if that would be as effective as it would be in the studio. When people come into our studio in the art school for the first time, they are always a little taken aback with how black my space is. It is completely dark and full of so many prints and drawings and paintings.

An important part also, is that they are all different. Some may look similar but it isnt the case. Each one is like an individual thought or emotion that I was feeling at that time or wasn’t feeling – depending on the day. I think this is also an important aspect as it highlights the fact that I have made everything by hand. There is nothing copied in the exact same manner. Even though loads of stuff has been painted black and appear to look the same because its black – each individual brush stroke is different. No two paintings are going to be the same. The brushstrokes are different, some long, some short, some dense, some not dense – all different and special in their own way. It is important to keep this factor running through out my practice because this helps illustrate the time that has gone into it all – there is so much that it is overwhelming sometimes. I have made so many prints etc and drawings, that no one else would do. Maybe there would be something similar produced – but nothing the exact same; because it is me. I am the the creator. It is my work and it helps me. It helps me get some stress out, or just to be at ease – even if only for a little while. As I have mentioned in previous posts, my work is rather personal and in a way that is (to me) how it should be. In my case, if I did not have a strong connection with such a topic then the work would not be nearly as powerful as it can be.

Like I said, pre-degree show is approaching and I am at a wee bit of stick whilst settling and deciding what I want to exhibit. I have been thinking that for pre-degree I could just make an installation of my work as I had planned but just not too big quiet yet – I think  I would save the very big installation with everything to the actual degree show in May. What is important is that whatever I do present shows the time and painstaking continuations. Whether that be in the form of an installation set up, or in the form of a large scale print/painting/drawing? – I still have a week or so to decide so I guess I will just keep going and hopefully the answer will come to me. 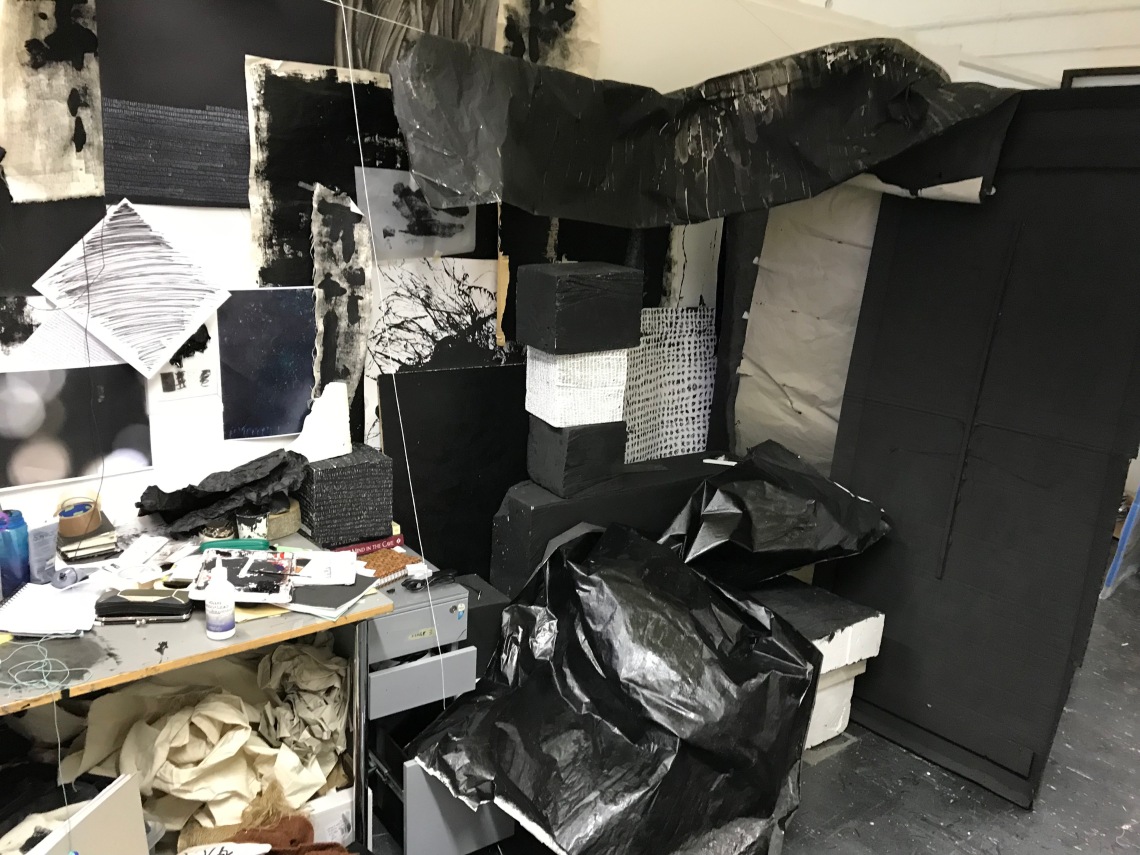 The more I make work in the studio, the more I do want to create an installation of some kind for an exhibition. I feel as though it is important for my work to be seen in reality, rather than just in photographs. I am trying to create more of an experience, rather than a ‘piece of work’ that can be sold and belongs in the art world so to say. My studio is my own little world and I guess in a way, I am trying to let people into it or at least just get a glimpse into my world. Many people of course suffer from depression but still, individual cases are different. Everyone has their own feelings as to why and how and what.

I am someone who keeps themselves to themselves, you might even say I am an introvert. I think this adds even more to my practice, as this is the only way that I really communicate this sort of thing. I have had some of these conditions for as long as I can remember, I do not ever remember being ‘normal’ or ‘happy’ – even when I was little – but at the time I did not know what it was, I thought I was just weird or different. But as the years have went by I have discovered and been diagnosed with such illnesses like clinical depression and obsessive compulsive disorder (the list could go on, so I will stop now).

I would say that my best work(s) is my studio. Putting things up and in an order as I go is when I work at my best. When I start to plan where and how I am going to display stuff on my wall or the floor or whatever, it usually goes to shambles – which in hindsight is a little odd. As I  mentioned I suffer from OCD, and I need things to be in a certain order and I have everything planned down to the T – but when it comes to my artistic practice I am a completely different person. I do not plan, I create instinctively and display instinctively. If you were to ask someone about my personality they would tell you how annoyingly I think about everything and have to be prepared for everything that may come my way – even the most unlikely and absurd scenarios.

For me, this is why my studio space is important and valuable. It is the one place I can let loose and make a mess and that it does not matter if I do not know what is going to happen, because that is just the process I have whilst making art. I create and then come back and reflect about what I have created. Why have I created this? What does it mean? There is clearly some kind of subconscious entity that created what I created and this is what is needed more within my work. Sometimes I forget to reflect on what I have done and then I get all confused and confuffled because I get lost in my own world. But, to me that is what art is. I can escape my every day struggles and stresses by just creating and making.