I thought to myself – I need to push this, to improve and somehow better what I am already doing. So I thought of a different sort of way to cover the world (hypothetically speaking) in darkness.

As I have previously mentioned before, when asked what I think or feel about depression and other similar mental illnesses that have ailed me – the main concept that comes to mind is just complete and utter darkness. Both in the physical and literal sense. My work recently is becoming successful within itself and is starting to portray the messages and thoughts that I want to put across. However, I know what those thoughts are because it is me, myself and I that is creating the work so even if I am not fully, consciously aware of why – there is a reason. Well not just one reason, but many reasons of course.

I started to reflect on my work and think how I could try something new. I have always been fascinated by film, within the art world and the real world with movies in the cinema. It is always something that I have been interested in – but never really tried to do because I was always reluctant. I am not very good with the technical side of things, so the fact that film can be very technical always put me off. But this is my final year at art school – so I thought it is now or never.

My first step to creating some sort of film, was I just thought to myself do what you normally do but on film. So thats what I did. This short film is a little experimentation piece where I am doing my typical time consuming process of mark making.

Going and going; until the darkness takes over. Until there is nothing left but black. Nothing left but some faint and blurry shapes surrounded by the overwhelming and completely consuming darkness. 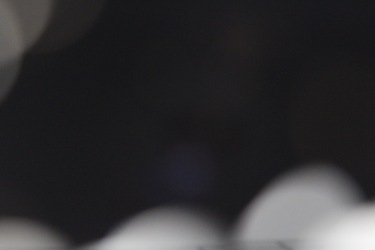 From this little experimentation, I extracted some still images which I also found quite interesting. After a little chat with one of the tutors in the art school, I discovered that there was a name for these sort of circles that appeared through the variations of light. “Circles of Confusion”.

I found the name very interesting and relevant to ,y practice in a way. The sort of confusion that is caused by the light is something that I would perhaps like to take forward at another stage in my practice. However, at this present moment in time I will still be focusing on my usual sort of practice but hoping to make it bigger and better.